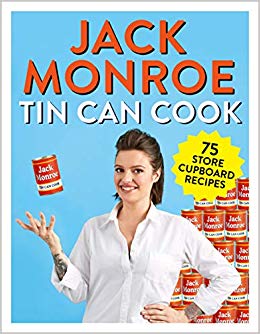 This is the 5* review I’ve also posted on Amazon & Goodreads.

Anyone who follows me on twitter will know I’m a big fan of Jack Monroe & her recipes, this is the third cookbook of hers I’ve bought & it’s already loved!

So impressed with this cook book. Written in Jack’s inimitable and endearing style it was intended to help those living on food bank parcels or with very limited budgets to create simple, nutritious meals in a short time and it does this beautifully. Pitched at the novice cook but in no way patronising for those with more experience it’s a lovely read and I already know I’ll be using this lots!

For me personally it hits another sweet spot though, and that’s in spoonie friendly cookery. For those of us living chronic life, suffering from disability and severe fatigue, cooking is a massive energy drain and often impossible. With rheumatoid arthritis in my hands food prep itself is a challenge I could do without, even with years of experience as a chef.

As someone who’s spent years ‘cooking from scratch’ it’s been a big adjustment to buy pre-prepped food without losing control over what’s in it (see ready meals – useful but not every day!). So discovering Jack on Twitter a couple of years ago felt like fate was smiling. I now happily eat tinned potatoes, olives, mushrooms, lentils, chickpeas, fruit, along with frozen peppers, stir fry veg, and spinach. Often cheaper, nutritionally sound and so easy as it’s already peeled \chopped\sliced and often partially cooked, it’s helped me cut down on wastage and save pennies! I also make my own wholemeal seeded bread and pizza bases – with a stand mixer and a slow cooker bread is an effortless wonder.

Additionally as I’ve followed Jack’s books and picked up more of her vegetarian recipes I’m only eating meat a couple of times a week, good for the environment and my budget! Highly recommend this, a fabulous variety of breakfasts, breads, soups, meat and vegetarian main courses, plus desserts will not leave anyone wanting for variety.

I’d highly recommend buying a copy for your kitchen, & if you can afford to donate one to your local food bank too it will be very gratefully received, or you can donate the cost of a copy to Jack’s GoFundMe & she’ll get it delivered through the Trussell Trust.

I’ve been asked a number of times to share #spoonie friendly recipes. I’m pretty sure this is my first. But what a great one to start with!

For me there is nothing that says Autumn more than a gently spiced root vegetable soup. It’s comfort food, a cuddle in a bowl. It’s healthy & warming. And so incredibly easy to make! I’ll give rough guides to quantity, but I rarely weigh or measure anything, most of my cooking is about being creative, and using what I have in the fridge/pantry.

It’s also about ability on any given day, & using short cuts where possible. For example I can’t chop hard veg anymore, my hands won’t allow, so my basic food processor is an essential kitchen tool. I sometimes buy pre chopped veg & other prepped foods – it’s often the difference between me having a meal of some sort or eating toast!

(I will try to remember to do a follow up post about some fab kitchen shortcuts if you’re disabled &/or low on energy).

So…. My Autumn Soup

Today this has made me five portions, at approx 147 kcals each. It freezes beautifully, meaning on low energy days I can have homemade soup in a few minutes using the microwave, and that’s a definite win.

Any combo of root veg &/or squash works brilliantly, I don’t think I’ve ever had one fail me and I’ve been cooking variations of this soup for years.

I love lentils, & they’re a great source of protein, fibre & potassium. If you don’t like them I promise you won’t know they’re there, but for me they add a lovely thickness to the soup. If you really don’t like them you could add a couple of potatoes instead, they thicken well too.

Spices are fun to play with, I love the North African flavour of cumin, turmeric & cinnamon. It just adds a little kick without being ‘hot’. But you could easily swap for ground ginger, smoked paprika or chilli, don’t be afraid to experiment a little.

I like to keep this pretty healthy hence the skimmed milk, you could use full fat or even cream & croutons if you’re feeling decadent!

This easily changes to vegan by changing the stock to veg & leaving out the milk. I’ve heard coconut milk is a nice addition but I’ve not tried it yet.

Comments welcome as always, let me know if you try making this 😊