I was browsing through my phone media, pondering a blog today on fatigue, and then this article popped up in front of my eyes. 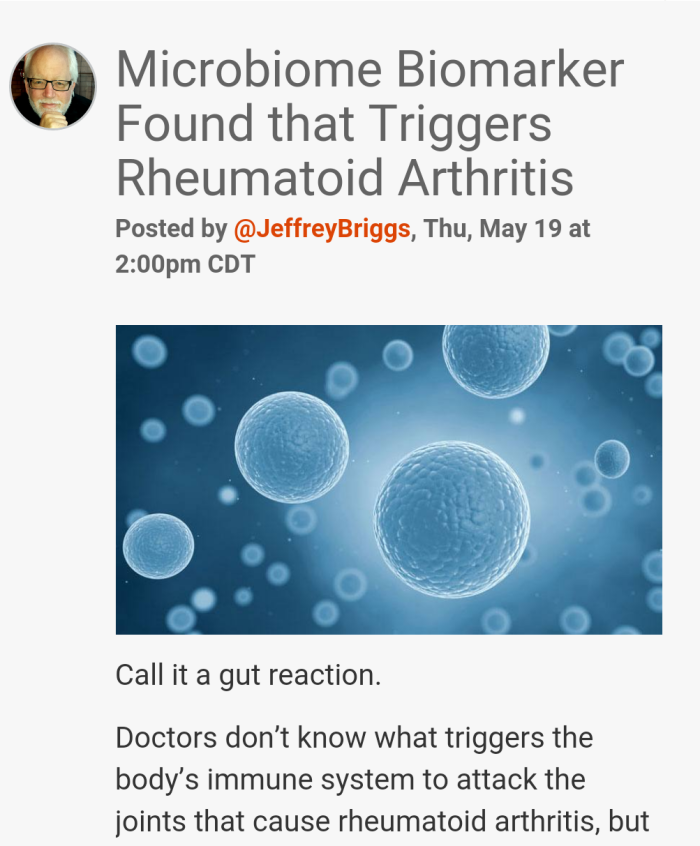 Link is at the bottom of the page.

To those not familiar with the RA or indeed the autoimmune world this is one of those areas that immediately provokes lively conversation, and often dissenting views. It’s a marmite issue if you will 🙂

Leaky gut is a term that’s been floating around for years, often touted by people who think gluten is evil, we should refuse all meds, and we should probably all live on organic mung beans. Served in knitted yoghurt pots. It’s a nonsense term as of course the gut ‘leaks’, it’s designed to. How else would we absorb goodness/drugs etc into our bodies?!

I’m being slightly flippant here but you can probably guess which side of the fence I fall on. My rheumatologist tells me diet is irrelevant. My personal experience tells me so. My GP agrees – standard advice is that a healthy balanced diet is best, do not exclude food groups unless you have a medically diagnosed allergy, as it causes more harm than good.

There is no scientific evidence to prove diet affects RA in any way.  Yet. I do keep an open mind. Honestly! However….

I’m still very dubious. I just don’t believe the answer is this simple. Bearing in mind this research has been targeted to ‘prove’ a theory already held by the researchers (and of course this is common practice), it is still full of its, coulds, shoulds, mights and maybes.

So is it possible those of us with RA have gut problems? Absolutely,  it’s actually incredibly common.  But my logical head tells me there has to be more to it, it’s not as simple as “which came first RA or Bacteria”?!

But this research comes nowhere near to explaining the following –

Why some families have clusters of Autoimmune conditions whilst others have sole sufferers?

Why some suffer from JIA almost from the birth and others don’t show symptoms until they are 40-50 yrs old?

It doesn’t explain the huge prevalence of woman over men with autoimmune.

It doesn’t explain why some patients with autoimmune commonly have more than one condition diagnosed.

It doesn’t explain why some patients who eat “clean” diets still suffer symptoms.

I absolutely believe the “gut”, gallbladder, liver, pancreas etc may well be involved. We have a complicated system that relies on food of many different types to stay balanced and healthy. I along with millions of others suffer IBS alongside RD, but so do many without it.

In my own humble and very non scientific mind I strongly believe RA, along with many other conditions is genetic in origin. It might well be triggered at any point in our lifetimes by stress or bacteria or illness or injury or pregnancy, but if that genetic marker for RA isn’t there it can’t and won’t occur.

I will, with many others, watch this space, small discoveries like this often lead to other bigger things,  and as I’ve said before I may be opinionated but I’m not closed minded ☺ I actually hope for all our sakes this leads RA research forwards.